Posted on December 24, 2012 | Comments Off on Don’t blame the messenger

I want to say this up front: I often find filmmaker Michael Moore to be a pain in the ass and I also find his opinions cringeworthy at times.  But he is also taking on issues that border on taboo and that can mean having to cringe occasionally.  If there were more like him we might be more open and less cringey about things.

Here is a great example:  Celebrating the Prince of Peace in the Land of Guns

I have been nibbling at these issues for a while, but Moore does a great job at bringing them into a cohesive narrative.  Small excerpt:

I’m not saying it’s perfect anywhere else, but I have noticed, in my travels, that other civilized countries see a national benefit to taking care of each other. Free medical care, free or low-cost college, mental health help. And I wonder — why can’t we do that? I think it’s because in many other countries people see each other not as separate and alone but rather together, on the path of life, with each person existing as an integral part of the whole. And you help them when they’re in need, not punish them because they’ve had some misfortune or bad break. I have to believe one of the reasons gun murders in other countries are so rare is because there’s less of the lone wolf mentality amongst their citizens. Most are raised with a sense of connection, if not outright solidarity. And that makes it harder to kill one another.

Comments Off on Don’t blame the messenger

Front and center in the debate-storm over American Gun Policy is a standoff between variations on two polar opposite opinions:

We can see this in action between Piers Morgan and Larry Pratt.

There is one obvious problem with the “mo’ guns, less crime” argument, not counting the statistical reality that it does not work at all: It does nothing to address the psychological impact of surrounding very young children with armed “teachers”.  Much of the experience in formal education revolves around developing a working concept of authority and independence.  An armed teacher is symbolizing a very different kind of authority figure.  Full stop.  The argument also falls flat when looking at the reality of armed intervention by regular citizens (vigilantism).  For every successful deterrent there are many accidental shootings of friends and family, like the one in Oklahoma that happened on December 18.  I encourage anyone to stop using Google for “Asian Ass Porn” for just a minute and search for “accidental shooting“, and feel free to add your city or state.  The results are shocking.

On the “less guns, less crime” side you have a very different set of issues.  First, there are a staggering number of assault weapons in the hands of Americans at this point in our history.  Sales of AR15-pattern rifles surged after the presidential election of 2008, and at each and every twitch of anti-gun sentiment since.  Freedom Group (parent company of Bushmaster) turned out more than 1-MILLION rifles (multiple makes) and sold 2-BILLION rounds of .223 ammo in the past 12 months.  That is one company of many.  I have personally witnessed the lines of gun buyers “getting theirs” before some threat of a “gun grab”.  The sales spike in AR15 weapons in the immediate aftermath of the Newtown shooting should stand as a monument to our priorities as a society.

The second problem with technological solutions is that the human animal is an “apex” tool builder and tool user.  Time after time we are shocked by both highly technical solutions, and the highly crude but effective solutions, that mankind turns to when faced with a “problem”.  A “gun ban” is not as simple as some promoters of the approach would make it seem.  As well as some gun-ban approaches have worked in other countries like Australia and Japan, they didn’t have a 0.88 gun/capita ownership rate (which I believe is a low estimate in the US), and they didn’t have the NRA pushing a mantra with the words “cold dead hands” front and center.  As well, if you think the armed massacres we have endured are bad, wait until you have an endless stream of armed resistance faced by Federal agents.  If you think I am joking you would do well to get out of the house more often.  I’m not saying that restrictions won’t be effective, but I am saying that they won’t be easy and they have the potential of sizable blowback.

Not to lay the whole debate on numbers, but this is widely accepted as accurate data.  I wish there was a better overlap of countries in the two graphs.  I will work on finding a better dataset and report back. 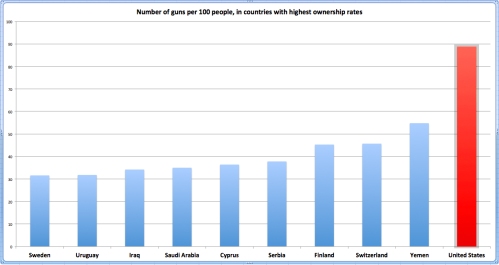 So what about the “third way”?  The third way is to rearrange our priorities as a nation, with a greater focus on physical health, mental health, fiscal security, jobs, and overall wellness.  If you know anyone who has sought mental health treatment the odds are that they found very limited resources, long waits for treatment, and inadequate treatment once they made it in the door.  They also may have feared the social and professional stigma of having been treated for a mental illness.  If they ran the treatment gauntlet, they may have encountered a system heavily biased towards pharmacological intervention.  That may or may not have provided any kind of real relief.

We also have issues with the role of simulated and glorified gun violence in our culture.  The lack of realistic depictions and a “reset button” mentality toward killing aside, the greater message is “eliminate, not negotiate”.   The widespread dispersion of this culture through television, cinema and video games makes it difficult to assess causation since it forms a kind of background noise.  Still, you would not be faulted for thinking that a generation with heavy exposure to first person shooter gameplay, and access to real assault weapons, might be on a playing field biased towards gun violence.

Once again, we are in a nation with massive social and fiscal issues, and great damage inflicted as a result, and our socio-political system is proving to be too broken to move toward a solution.  I hope that the bigger issue of “emotional infrastructure” gets a fair hearing in the coming months.  I dare to dream, knowing that it is not much more than shadows of what could have been.

Comments Off on The Third Way

Posted on December 16, 2008 | Comments Off on Happy Festivus

Every year it gets harder to really celebrate “the holidays”. I’m all for any good reason to get together with family and friends, but something (me, probably) really has changed. Part of it is probably that the “Thanksgiving rule” for when to start Christmas music commercials has gone the way of the dodo. I heard the first one of the year back around Halloween. Fuckers. If you remember “Hey Now” Hank Kingsley (played by genius actor Jeffrey Tambor) from the old Larry Summers show, then you know where I’m coming from on that. Fuckers.

Anyhow. These things happen. It is a time for the kids, and I spoil the kids in my life pretty well. Not all the time, but around the holiday season I can get away with it under the banner of holiday cheer. I’d like to wish the best everyone who I won’t get to see over the next month or so. I do that most of the year anyhow, but this time with feeling.

So gather ’round the aluminum pole, air grievances, explore the feats of strength, and don’t feel like you are beyond marking your own holiday tradition. Speaking of which, my pal Nate sent me a link to his pal (my iPal on Myspace, etc…) fossilapostle and his groovy new holiday sensation: Zappadan Ain’t it funky now?

Comments Off on Happy Festivus